So now I’ve composed some “new music”.  New, as in recent AND in genre. Musicworks magazine has this annual contest for Electronic Music compositions, and I decided to give it a shot. I’ve always enjoyed piecing together found sounds into music, so why not toss one of my monsters into the arena?

For this attempt at officially composing something I wanted to base it around some field recordings I had: a decade-old clip of backyard construction and bird sounds, and a more recent sample of talkative crows. I wanted a rhythmic, ambient piece, so I required washing/drying machines, circuit-bent drumkits, and sampled pistachio shells in varied receptacles for organic ‘drums’.  I even included my thrift-store robot pals (these toys make great randomized glitch noise). I put it all together using Ableton Live, added a nice synth patch from iZotope Iris for a melody, and a choice sci-fi drop from “Destination Moon“. The finished work is just under the 10 minute maximum time.

It makes for interesting background music or sonic brain transport with eyes closed. I wanted to fuse naturally occurring spacial city sounds (mostly birds and urban construction) with additional machine sounds and electronics to convey that ‘always building’ hum in society that seems inescapable, but rhythmically curious. Try blasting this one out of yr car stereo for the ultimate urban landscape effect when cruising! As per usual, I’ve got some related pics of the process. I operate with heavy machinery.

Washers and dryers create the most interesting random sounds.

I don’t know what these robots are talking about, but it might be interesting.

I ate a bag o’ pistachios, and wanted to make percussive sounds. Is that so wrong? 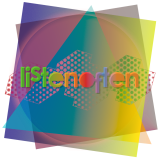 An electronic musician and artist who produces fine experiments; DJ of minimal renown; designer of graphic elements; occasional peruser and user of media.